A Warhorse is what it sounds like, a horse for war. They typically have battle oriented gear (armor, spikes, etc.) unlike a normal riding horse.

if friendly). A warhorse is a type of horse and an Apprentice-level mount which increases movement speed by 60%. The Alliance warhorse is white and has a blue and silver livery, the blood elf mount is black and has a red and brass livery. The epic mount for paladins is called a Charger.

Paladins learn Apprentice riding when they learn to summon a warhorse.[citation needed]

Those who complete the Template:Achivement will receive either the

[Crusader's White Warhorse] or the

The [Celestial Steed], available to all players, is said to be a supernatural warhorse. 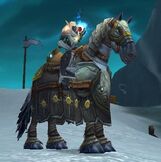 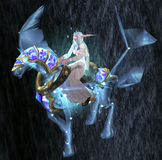