This article is about the living dead in general. For the playable race of undead, see Undead (playable), for lore see Forsaken. For the Lich King's faction, see Scourge. For other uses of undead, see undead (disambiguation). 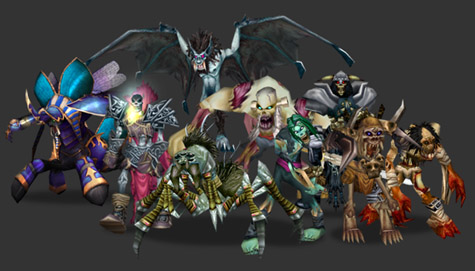 The undead were once-living creatures, now animated by spiritual or supernatural forces.[1] The term undead refers to all creatures or entities that function normally despite having terminated life functions. Most commonly known as zombies or ghosts, undead beings are most typically mindless, bloodthirsty fiends hostile toward any living thing that comes across their path.

The undead have appeared all throughout Azeroth, most commonly in nature as revenants or wraiths. They were used as a combat tool during the First War when the necrolytes of the Horde learned to animate corpses as skeleton warriors in their fight against the Alliance. Later, the studies of the necrolytes developed into necromancy, the form of magic used very heavily in the Third War when the Cult of the Damned spread the Plague of Undeath across Lordaeron.

In modern times, "undead" refers primarily to either the Scourge or the Forsaken, since nearly half of the human race have since become undead. However, Forsaken player characters and NPCs are for most intents and purposes considered to be "humanoids" in World of Warcraft due to gameplay reasons and do not share all the characteristics of other undead. This is not the case according to the lore in other sources where Forsaken share all the characteristics of standard Undead.

For game balance, the Forsaken are registered as humanoids because, in a PvP setting, they would be massacred with Exorcism, Holy Wrath, Turn Undead, and Shackle Undead, but they would also be immune to other CC such as Polymorph and Fear. Forsaken were classified as undead in Beta, but it proved to be too problematic with PvP balance. Many Forsaken NPCs are also considered humanoid.