Not to be confused with Refuge Pointe or Runic Power. 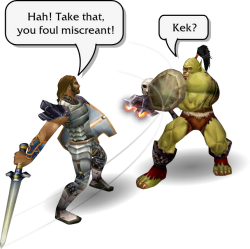 Roleplaying (RP), or Role Playing, in World of Warcraft means taking on the role of a character and acting it out in-game through emotes, /say, /yell, and sometimes other channels. Players may also participate in roleplay outside the game by posting on blogs, wikis, or forums (official or otherwise). Roleplaying has similarities to improvisational theater, with the participants acting out characters in unscripted situations. The character's personality, goals, morals, and quirks may resemble that of the player or be completely different. Regardless, roleplayers recognize a boundary between what is in character and what is out of character.

The same is true for RP-PvP Servers and PvP Servers. Both sets of rules apply. RP-PvP is commonly misunderstood to mean that the roleplaying part is optional. In fact, these servers were started in response to petitioning from roleplayers, who felt that the ability to engage in PvP added realism.

In addition to Blizzard's normal In-Game Policies, players on Roleplaying servers are expected to abide by the rules outlined in the Role Playing Policy. In summary, players should:

-Ahoy mateys! Ya'll never guess what loot was that ol' witch packin' into the treasure chest

-All beak and no bite as usual Salty, spill the beans or take a walk down the plank!

Under certain circumstances, however, shorthand and acronyms are indeed used. In combat situations or raids, "battle jargon" is generally acceptable, as one would definitely evolve to convey the most strategy in the fewest and shortest words. Directing parties using fully worded "There is a patrol incoming, please move to my location", while atmospheric, would prove less effective than a brief "pat inc, cmere". Abusing "war lingo" outside of combat could be simply considered rude IC.

While it is not mandatory, several players and even entire guilds in role playing servers enjoy the creation of a background for their in-game characters, if you ask around several players will tell you about how their parents were slain by a tribe of trolls or when they applied for the stormwind army but were rejected due to not belonging to a royal family, some guilds even join together under the same cause and recruit people with similar backgrounds to their own in an effort to keep the members feeling related to each other and to make it feel like they're fighting for the same reason

...we work reactively in response to players' reports. Thus, if you observe players attempting to disrupt roleplaying events through the use of verbal, physical, or visual harassment, I would encourage you to submit an in-game petition...

...it is contrary to our stance of not "policing" realms in search of policy violations -- which is, again, in line with the reactive nature of our investigation -- and partly because it is simply not logistically feasible to offer such a service, given the resources it would require. We urge you, however, to report any wrongdoing you observe...

Blizzard GMs do not go looking for RP violations. They address these issues entirely in response to player requests which means that going "Out of character" or not participating in role-play cannot be deemed as against any of Blizzard's policies or Term of Service or Uses. It is up to the community on each RP server to establish the degree of policy enforcement they wish to see. Lack of community enforcement is often why more serious players do not play on RP servers. Whereas one server's community may take a very strict approach to naming, another may be relatively lax. Rather than Blizzard GMs deciding how far to take it, it's up to the players themselves to "set the barometer" and determine what is acceptable or not. The GMs can then compare the infraction to the policy as worded, and apply disciplinary measures as required.

Thus, it is up to players on RP servers to proactively support the enforcement of the official RP server policies by reporting infractions to GMs.

RP Made Simple Putting the RP back into MMORPGs. Home of the RP Survival Guide, for new and old roleplayers and non-roleplayers to learn about RP.

Roleplay at Thalanaar.org Conversational primer on Roleplay for new players.

Dramatis Personae A WoW roleplay community with race-themed monthly events with prizes, as well as a decent-sized community of immersive roleplayers.

WowInsider All the World's a Stage a series of blogs with helpful hints, tips and tricks on the art of roleplay in WoW

WowInsider Roleplaying a race change for your character

WowInsider How do you reconcile faction disloyalty in roleplay?

WowInsider What happens when players take a break from roleplay?

WowInsider Why public roleplay is a critical part of roleplay servers

WowInsider 3 things to remember when you encounter a new roleplayer

WowInsider The trials and tribulations of being a raiding roleplayer

WowInsider Help your roleplay character along with a character questionnaire

WowInsider How to assemble a character history for your roleplaying character

WowInsider All the World's a Stage: Roleplaying plot points Q&A

WowInsider Drama Mamas: When roleplayed love is in the air

WowInsider 5 hidden hangouts for roleplayers in Mists of Pandaria

WowInsider 5 upcoming hot spots for roleplay in Mists of Pandaria

Essence of RP with Kexman and Almighty Farseer on WCradio. (updated nearly daily as of November 25, 2009-RETIRED)