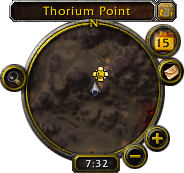 The minimap, or mini map, is a circular, zoom-able overhead view of the area around your character (represented as silver arrow pointing the direction your character is facing).

Besides being able to zoom the view in and out, the minimap has a variety of informational UI features. 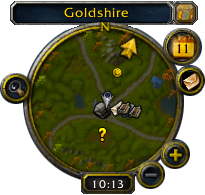 Moving the pointer over the blip will give the creatures name.

When you talk to a guard and ask for directions, minimap features will help you find your target. 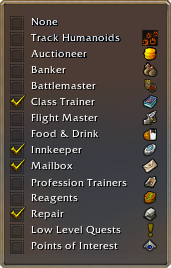 The tracking options control usually appears on left side of minimap:

When you click it, a tracking control menu with checkboxes will appear.

Similar to tracking creatures or resources, you can also track on the minimap locations of vendors or services that will help you while playing.

When your character is near a point of interest, often times a city or town, a silver edge arrow (

) will appear on the edge of the minimap indicating the direction of the settlement. This option can be turned off.

Usually only applies to Druids and Hunters with Track Humanoids.

) will show up on the minimap.

If you click on the minimap, you can ping a location that is visible to other members of your party.

It has a tracking menu button on the left:

It has a date and new mail indicator on the upper right.

The minimap has zoom in and zoom out buttons at the bottom-right:

Lastly, there is a clock at the bottom.