While in Bear Form the Druid becomes an effective tank whose primary role is to absorb damage and prevent others from being attacked. 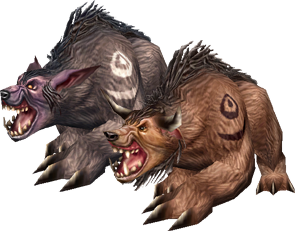 [Bear Form] is obtained at level 15 from the druid class trainer.

When a Druid shapeshifts into a bear the following happens:

A Druid lives off of his or her agility and superior stamina in bear form. Agility is of particular importance because not only does it increase the chance to dodge (avoidance), it also gives attack power (AP) to increase damage done and threat on a target (threat per second, or TPS). Agility also increases the chance to critically hit, which is a Druid bear's basis for proccing [Savage Defense] to block some of the incoming damage. Stamina is also important for it is the basis of the Druid's health. With enough stamina, a Druid bear can take on the challenge of being a tank.

Advantages of a Druid Tank

Disadvantages of a Druid tank

As of patch 3.1, druid tanks gained the [Savage Defense] ability which allows them to absorb a certain amount of damage from melee attackers, effectively giving them a block. Since the ability procs based off of critical strikes, agility is now more important than ever for druid tanks.

As of Patch 4.0.1, Defense has been taken out of the game for druids.

Due to tanking class changes in Cataclysm, all four tanking classes have been brought closer together. While there are still differences between stats and stat priorities between each tanking class, all tanks generally take the same damage.[1]

Druids have both a single target Taunt and an AOE Taunt. In times where a Druid must generate a lot of threat in a short amount of time, the use of Mangle and Maul together can establish a high amount of threat within the period of one attack. It should be noted that both of these abilities can crit, generating around double the threat.

Another useful tool for Feral Druids is [Faerie Fire (Feral)] which requires no rage and assists in initial aggro establishment as well as allowing a Druid to perform a ranged pull without having to shift out of Bear Form and use a mana-based ranged spell. Faerie Fire also has the benefit of not having any travel time, which allows for better control of when a mob will be pulled.

Feral Druids can almost immediately recover from many knockbacks using [Feral Charge] and [Skull Bash] (interrupt). If neither of those are available, [Stampeding Roar] can give the Druid enough of a speed boost to re-engage his or her target.

Some encounters, notably High King Maulgar, Nightbane, and various trash in Gruul's Lair and SSC, are made easier with fear-eliminating abilities. Groups with a Druid main tank in these encounters must either use [Fear Ward] or [Tremor Totem]s. Druids can also use fear-dispelling trinkets such as Insignia of the Alliance/[Horde], although these are all on relatively high cooldowns.

As of patch 4.0.6, [Berserk] no longer cancels fear effects.

Druids are affected less by being disarmed than other classes as their attacks are made with claws and teeth. This means that often they may be affected by the Disarmed debuff, but it doesn't change their attack power or prevent them from using their special attacks. This can be rather useful in encounters such as General Rajaxx. On the other hand, sometimes the Disarmed debuff is enough to trigger an effect, as with the Ethereal Thief mobs in Karazhan.

Even though Druids couldn't previously make use of chance-on-hit weapon enchants, this has been changed in patch 3.0 making many of them viable for Druids to use.

Both the Feral Combat and the first few tiers of the Restoration talent trees have talents which improve tanking ability in some way.

(Note: This is just one of many specs)