The dark trolls (a.k.a. dark forest trolls[3]) are the tallest and rarest known species of trollkind.[1] Some have decided to classify this species as the fifth category of trolls.[4]

During the Battle of Mount Hyjal a clan of dark trolls joined the night elves and fought against the Burning Legion, helping for the salvation of Azeroth.[5]

There is no evidence that the dark trolls have ever formed a civilization or nation. As their estimated numbers are so few their existence as a distinct category of trolls is considered highly questionable. It seems likely that they are derived from a single troll tribe.[2]

When Grom Hellscream first arrived in Ashenvale Forest, he found and destroyed a dark troll settlement.[6] Later, small settlements of dark trolls were destroyed by Tyrande, Malfurion, and their army during their search for the Druids of the Talon.[7] However, a group of dark trolls named the ShadowTooth Clan joined the night elves in the Battle of Mount Hyjal.[5]

Dark trolls are muscular, wiry humanoids that stand almost 10 feet tall.[1] They have a royal purple hue of skin [2] and pointed features. Their choice of war paint tends to be black or a shade of purple. They have pale yellow eyes that glare as they slip out of shadows.[1]

Dark trolls lead a mostly subterranean existence,[2] and emerge at night to hunt.[1] They have a tribal structure, in which physical power and cunning are held in great esteem. Tribal shamans offer spiritual guidance and divine magic when necessary. This is similar — but far more primitive — in social structure to jungle trolls, the most civilized of trollkind. They practice voodoo, ritual sacrifices and even occasional cannibalism. Dark trolls are possibly the most violent of all troll species and are feared even among their own kind.[1]

It is known that their society contains shamans,[1] berserkers, trappers, shadow priests, and high priests, and their groups are led by warlords.[8]

Dark troll culture is as primitive as their forest troll cousins but they are more violent than forest trolls,[9] and it has been theorized that dark trolls are much less intelligent than the other trolls.[2]

It is said that there are various tribes within the dark trolls,[1] however, only one organization is known so far: The ShadowTooth Clan.[5]

Alleged sightings of dark trolls usually involve hulking and brutish creatures who attack with little tactical planning or coordinated effort.[2] They attack with battleaxes or spears in combat, but they are by no means limited to using weapons. Even when disarmed, they can be lethal with their claws. They fight without fear, relying on their natural healing ability to keep them going. A dark troll's favored class is barbarian.[1]

Besides the units from the melee maps new units were added to this official scenario map:

In World of Warcraft?

The Cult of the Dark Strand in northwestern Ashenvale has a number of troll members who could possibly be dark trolls, however, no dark troll settlements has been seen, and those in the strand are likely jungle trolls.

Concept art for dark trolls has surfaced, but they did not appear in the 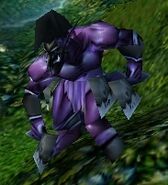 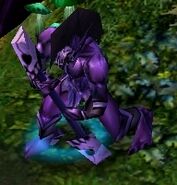 WowInsider Wouldn't this be cool? The dark trolls and the underworld