Character Info frame (sometimes called "character sheet") displays information about the player's character. A window that by default shows the character's name (with title), level, class, guild (if a member), equipped items, and paper doll rendering. The character info window is usually accessed via the default "C" key binding. Since

Patch 4.0.1, attributes, combat stats, resistances, and other info is viewable in a slide-out Stats panel accessible via a button at the lower right of character window. In addition, an Equipment Manager feature was added to manage equipped items via a separate, but attached window that is accessible via a button to the upper right of the character window. Lastly, you can see reputation levels and currency counts via the Reputation tab and Currency tab.

In addition to the character info, the window also gives access to other info panes via the following tabs and buttons:

Located at the extreme top-right of the window, this button (

) closes the window. It basically follows the MS Windows UI convention, since on the Mac OS the equivalent UI button is at the top-left (red marble in OS X).

Just to the top-left of the 3D character preview figure, these buttons rotate the preview counter-clockwise and clockwise.

Besides the basic character info, paper doll, slots and resistances, the character info window has a slide-out Stats panel with a large set of character stats: 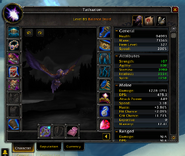 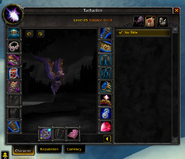