==Collections of the Legion==

Founded by the rogue titan Sargeras, the Burning Legion includes many demonic races. Some of most prominent of which include the man'ari eredar (such as Archimonde and Kil'jaeden), nathrezim (such as Tichondrius) and annihilan (such as Mannoroth). Member races are either subjugated and absorbed as slave races or enticed into joining with offers of demonic blood to empower them. In a few rare cases the races have joined of their own accord, such as with the nathrezim who saw an opportunity to feed on more souls. It is uncertain how many races were truly evil to begin with, such as the nathrezim, how many were corrupted with the offer of power, such as the eredar and fel orcs, and how many are slave races.

The Birth of the Legion

Long ago demons roamed the universe destroying life and creating havoc. At this time none of the demons united together, each was its own enemy. Pantheon was an ancient group of extremely powerful titans that lived to create life and order and ridding darkness thought the cosmos. Sargaras one of the members of the titans, throughout his thousands of years carrying out this task he imprisoned many demons, dread-lords and different types of evil that created this destruction. However, with doing this his mind began to wonder to thinking that since there is so much evil in the world that maybe this is what was suppose to thrive and not order. After discussing his thoughts to the other titans of Pantheon they were unable to convince him of his thoughts and Sargaras left for his own mission, destroying the order he once fulfilled. He began thinking that the titan creations were responsible for the chaos and that they all needed to be cleansed. To carryout this task he went to the prison that once held his captured demons and freed them in with the hope of them joining with him and forming an army the Burning Legion. This army would continue Sargeras plan of destroying all titan worlds. Doing this would they go from planet to planet destroying it by fire or even taking control of its leaders.

While on their path of destruction the Burning Legion and Sargeras came upon a planet Argus (original homeworld of the eredar). On this planet Sargeras found his two leaders both who are eredar (Kil'jaeden/Archimonde). Kil'jaeden was tasked by Sargeras to get other races to joining the Legion while, Archimonde was tasked to destroy anyone how opposed. With this the Burning Legion was born and stonger than any other force the universe has ever seen. 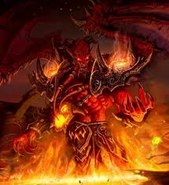