Blackrock Spire, aka Black Rock Spire, Black Rock, or Castle of Blackhand, is a dungeon. Blackrock Spire is the part of Blackrock Mountain that is above ground.[1] It is inhabited by members of the Dark Horde — orcs, forest trolls, and ogres, as well as their new allies, the black dragonflight led by the son of Deathwing — Nefarian.

It consists of two parts:

Upper and Lower Blackrock Spire also gain their names from real world rocky outlets off the coast of Saint Helena.

The mighty fortress carved within the fiery bowels of Blackrock Mountain was designed by the master dwarf-mason, Franclorn Forgewright. Intended to be the symbol of Dark Iron power, the fortress was held by the sinister dwarves for centuries.

When the Horde first arrived in Azeroth, they invaded the upper portion of the Dark Iron's fortress in Blackrock Mountain, Blackrock Spire, and claimed it as their base of operations. They held it until Alliance forces routed the Horde from their capital, in one of the last major battles of the Second War.

However, Nefarian - the cunning son of the dragon, Deathwing - had other plans for the great keep. He and his draconic minions took control of the upper Spire and made war on the dwarves' holdings in the mountain's volcanic depths. Realizing that the dwarves were led by the mighty fire elemental, Ragnaros - Nefarian vowed to crush his enemies and claim the whole of Blackrock mountain for himself.

Blackrock Spire, the site of arguably one of the most terrible battles ever to ravage Azeroth,[2] such as the Assault on Blackrock Spire.

It is also home to a ley line pattern of incredible martial potency.[2]

The entrance is located by following the broad circular road up and around to the northeast corner of the large central chamber The Molten Span. Enter the ruined buildings there and proceed upwards until you find a narrow doorway.

Blackrock Spire has two sections. The first is referred to as "lower spire", or LBRS, and is the main chunk of the instance, intended for a single group of players. The second is "upper spire", or UBRS, which is a much smaller area, but intended for 10 players setup in a raid group. The player cap was 15 prior to patch 1.10, when it was lowered to 10. The Seal of Ascension is a quest reward that was once used as a key to access this wing. 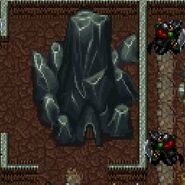 Blackrock being guarded during Warcraft I.

Blackrock during the First War.